Inside the immense flow of data exchange, the new technologies have facilitated an interdependency between the spheres of what is private and what is public, between interior and exterior, leading us to reveal, in an increasingly natural manner, our experiences, thoughts and feelings, enlarging the circle of intimacy to the point of sharing our inner life with the invisible, abstract audience of Internet users. Things personal become collective, things belonging to others become our own and intimacy is no longer something that is preserved and kept in our innermost circles, but something that is projected in all directions in an eccentric movement. Thus intimacy turns into extimacy, to use the term created by Jacques Lacan to define the existence, within the most intimate sphere of the I, of a “foreign body”, that which is external to the individual and with which one identifies.

We need to share our intimacy because what we are is defined both by our subjectivity and by what surrounds us. In the realm of digital art, several artists have worked with the new parameters of subject, body, interpersonal relationship and intimacy introduced by the new technologies. Their works enable us to initiate a reflection on the ways in which the mobile phone, e-mails, chats, social networks and instant messaging systems modify, increase or condition our communication with others. They also allow us to consider where the boundaries of our personal space lie, where our “I” ends and that of others begins.

“Extimacy. Art, intimacy and technology” is a group digital art exhibition which puts forward a proposal that spectators reflect on these concepts through the presentation of works by recognised artists from the international scene. Interactive installations, mainly, that involve spectators in what is active participation with the work, which never ceases to be a piece with its own identity, the fruit of the firm artistic background of creators who combine art and technology in their work. In an era in which the user adopts an active role in the diffusion and manipulation of information on the global network (known as web 2.0), in art, too, a change in roles between spectator and work is taking place, with interactive art as the best expression of this new paradigm. The works of some great names from this sphere, such as Christa Sommerer and Laurent Mignonneau, Rafael Lozano-Hemmer or Paul Sermon, for instance, are combined with the creations of promising artists like Gazira Babeli, Clara Boj and Diego Díaz, Gregory Chatonsky, Carlo Zanni or Martin John Callanan. All of them exhibit the multiple facets a concept as complex and at the same time as simple as extimacy can present, from different angles and with diverse intentions. You walk naked on a beach modelled after Es Trenc (Mallorca). The beach is populated by naked avatars, all of them wearing the hat and sunglasses of Gazira Babeli. As you mingle with them, Beavis Palowakski, a voyeur smoking a cigar, insults you. The Bathers is a playful recreation of the idyllic scenes once depicted by Manet, Renoir, Cézanne, Picasso and many others. A teenager’s room: the desk, the computer with webcam, posters and photos of her music and movie idols. Upon approaching the installation, the visitor’s face is recorded by the webcam. Custom software identifies the area of the face and sends this image to the projector, so that the visitor’s face is superimposed over those of the famous people in the posters. 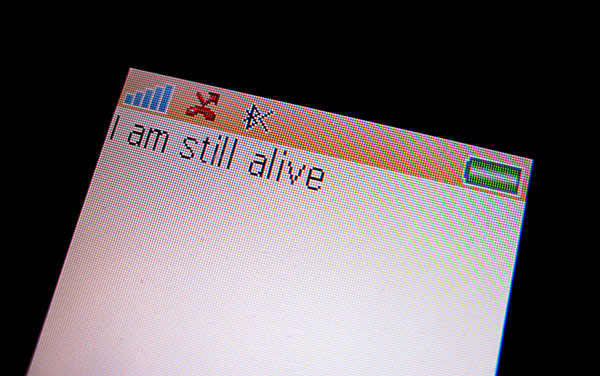 A hidden transmission device is continually searching for visible and open devices (mobile phones, laptops, etc) within a local area. On discovering a device a simple message is sent, which reads: “I am still alive” (translated to the official local language). I Am Still Alive is active at various times and in various locations; details of which are not disclosed.

The International Directory of Fictitious Telephone Numbers is a collection of telephone numbers that are designated never to function. Their purpose is to be reserved indefinitely for use within drama or film productions so that unsuspecting people aren’t disturbed by inquisitive viewers.

Enquires were made to the telecommunication regulators of each nation state. All possible numbers for each country with such reserved ranges are ordered and listed in The International Directory of Fictitious Telephone Numbers.

The printed directory is accompanied by an apparently normal looking telephone. This telephone has been reprogrammed and reconstructed to automatically dial the numbers from the Directory, at random. The dialling tone is followed by the numbers being dialled, then the response: a dead tone indicating no number, or a recorded message stating that the number is not in use, from a telephone exchange in any part of the world. The telephone then hangs-up before selecting another number to dial at random. Dance with me is made of 157 videos taken from YouTube. Every video shows a young American woman performing the same R’n’B choreography. If a visitor has an MP3 player, he can connect it to the set-up. The young women then start to dance on the selected music and follow its rhythm and volume intensity exactly. By simply touching a glass surface with one’s hand, one virtually manipulates a video image representing a man’s and woman’s hands. One can make them touch, move apart, skim. After a while, the two hands don’t seem to respond any longer to the user’s manual commands. They touch each other freely as the installation continues to exist simultaneously in another physical space and on the internet. What one perceives in the end is the outcome of the interaction of the others. All the interactions are recorded in a database and may be added subsequently and performed again. A young woman in her room. She seems ill. Sometimes she is better. Sometimes she is worse. Each of her reactions seems to respond to a secret logic. As the day goes by, she hardly breathes, she relaxes, she gets up, she collapses. Everything starts over again. Somewhere else, people die, are injured, governments are overthrown, elections are won, raw material gets scarce, negotiations are being held, treaties are signed. Everything starts over again. The state of the world is a fiction which reacts in real time to the CNN news. The young woman gets worse or healthier depending on what happens in the world.

“Pulse Index” is an interactive installation that records participants’ fingerprints at the same time as it detects their heart rates. The piece displays data for the last 509 participants in a stepped display that creates a horizon line of skin. To participate, people introduce their finger into a custom-made sensor equipped with a 220x digital microscope and a heart rate sensor; their fingerprint immediately appears on the largest cell of the display, pulsating to their heart beat. As more people try the piece one’s own recording travels upwards until it disappears altogether —a kind of memento mori using fingerprints, the most commonly used biometric image for identification. This is an installation that exists within the telematic network between two installation locations that function as customized videoconferencing systems. In the first location a video camera picks up a birds-eye view of a double bed beneath it – the exact 3:4 aspect ratio of video format. The camera image of a person lying on the bed is then sent to another videoconferencing system in a geographically distant location. In the second location, the digital image feeds to a video projector situated above another double bed. The live video image is projected down onto the second bed where another person is lying. A second video camera, situated next to the projector receives the view of the live life-size projection of the first person on the same bed as the second person. This camera image is then fed directly to a video monitor next to that bed, and back via the videoconference connection to the first location – feeding one more video monitor by the first bed. In November 2008, Carlo Zanni was caught by the camera of Google Street View when he was walking his dog on Via Gaetano Strigelli in Milan. He extracted the image from the web and ordered a large oil on canvas triptych from a company he found on the Internet.

The Possible Ties Between Illness and Success (2006)
Data cinema

A short movie transformed by an Internet data flux and re-edited server-side when web statistics (Google Analytics) are available: the public can watch a new movie every day. The core idea of “The Possible Ties …” is the relationship between manic-depressive illness forms and success at large, a theme it symbolically tracks through the filming of an ill man and his partner. The man’s body progressively fills with stains: quantity and position depend on the number of users visiting the website (and their country of origin). The more users, the more stains, thus causing the “illness” to spread all over the body.

The Possible Ties Between Illness and Success (2006)
Cine de datos

The Possible Ties Between Illness and Success (2006)
Cinema de dades

One thought on “Extimacy. Art, Intimacy and Technology”