Interview by Alessio Chierico for Digicult 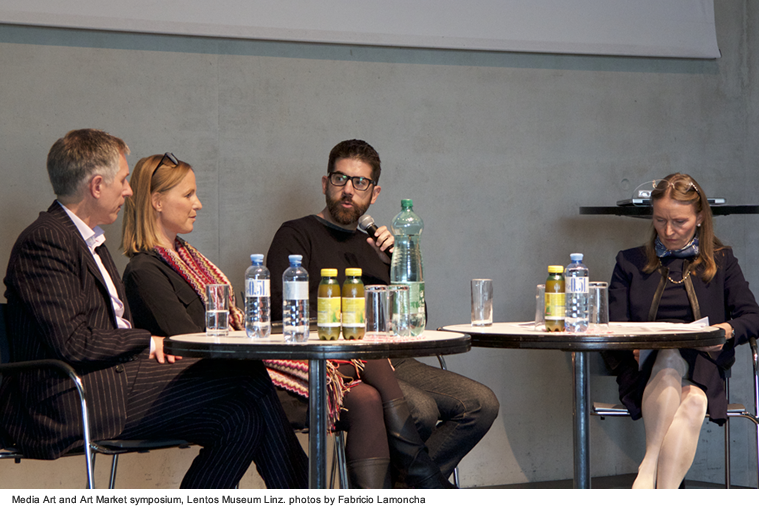 As one of the speakers invited to the Media Art and Art Market symposium that took place at the Lentos museum in Linz on October 10th, 2016, I was interviewed by artist and researcher Alessio Chierico about the topic of the market for new media art and the role of the curator in a society dominated by search engines. The interview has been published on the online platform for digital art, design and culture Digicult. Below is an excerpt from the interview.

Alessio Chierico: In respect to the dissemination of creative contents over the net, have you observed any form of assimilation of typical internet phenomena (meme, for instance) in recent artistic practices?

Pau Waelder: This question leads me to think about post-internet art, and it’s very interesting for me. During the last decade, while I was focusing my research on New Media Art, my first reaction to post-internet art was: “This is stupid, this makes no sense, this is not what it should be”. When I started to focus on it, however, and read the texts of Artie Vierkant and other people who gave it a bit of structure, I started to think that it was more interesting than I had initially thought. For me, this was a lesson in seeing beyond my own perspective about what Media Art should be. Now what I see is very interesting: This new generation is taking all these contents from the Internet that for them are already natural, are already part of their culture, and then incorporating them into works that can take any form.

They even say that the artwork can simultaneously exist in different forms; as an animated gif, as a print, and as an object. These artists are incorporating things like memes, like everything they see online, everything they experience, into their artworks. Websites or apps like Tinder, or Instagram, or any other ones, are already part of their cultural DNA, and thus they become part of their artworks. It’s a new kind of cultural baggage, a new set of themes and subjects, that are very naturally presented there, and the implication is, that an effort must be made to learn about it. What I see concerning this generation is that they are speaking about the Internet, without actually directly referring to it. I mean that it is integrated, it is part of their subject. The important thing is that we are past the phase in which we have to talk about the technology itself, because now everybody knows what we are talking about. Now we can go to the next step, and talk about other subjects that are related to it. So, when a meme is introduced in an artwork, the meme is just part of the conversation, part of the artwork.

Alessio Chierico: You said that in the beginning you were not really impressed by the idea of post-internet. when did you start to become interested in it?

Pau Waelder: The problem is that post-internet art came out with a lot of self-awareness. If you think about the avant-garde movements, artists first did something, brought things together, and then somebody gave what they were doing a name. When I started to do a little research on post-internet, I understood that after Marisa Olson had coined the term, it suddenly it became the new theme, and many people were getting involved in it; it was simply the place where you had to be. So, everybody was working as a kind of entrepreneur, thinking: “Ok, if I can manage to have this label applied to my work, it will be a part of the contemporary art scene, and I will be promoted”. I saw a lot of this self-promotional idea behind it.

The problem is, that it eats itself up. When you read the text of the exhibition called “Art Post-Internet”, that Karen Archey and Robin Peckham (former Digicult author) put on, you find out about an interesting survey in which they interviewed many people in the Media Art world about post-internet. That text already maintained, that post-internet was dead. People, artists, curators who were participating in this label, were saying “Yes, but this is passé”, at the same time they were promoting it. At some point, it seemed inappropriate to talk about post-internet, because there were too many people that wanted to jump on that wagon. It became too much of a hype, and it was good to be beyond that. It is interesting to see how that happened: There was a small group of people, mainly based in New York, who created a network about around post-internet art, and managed to very rapidly promote it. Historically, the most important thing about post-internet is that it represents a new generation of artists, who are past the New Media Festival era; they have studied with the Media Art masters, with the people who won the Golden Nica, who were in the extremely strong scene of the 90s that was very much related to engineering and research.

This new generation wants to go back to the gallery, they want to make money, they want to be recognized by the contemporary art world; you have to consider all of these aspects. If you think about how New Media and contemporary art are meeting, I think post-internet is a key moment. A number of young artists who took part in auctions like the Paddle8 in New York suddenly got a lot of attention from the media because of the connections they had. Some of them very quickly went to big galleries. I think all of that has already faded away, but it was interesting, something you had to pay close attention to. For instance, I found the career of Petra Cortright fascinating, and I would like to consider it more closely. She went from being a YouTube cam girl, to a highly regarded artist. I recently read an article where she was called the “Monet of the 21th century”.

Read the rest of the interview at Digicult

[…] to Sell Online Art and Make Millions (of visits)”, written for The Wrong Biennale 2015, and an interview by Alessio Chierico on the occasion of the Media Art and the Art Market symposium in Linz in […]